The Tiring Business of Having a Social Life

This week has been half term.

Now, however, I am realising that I have all the work to do that I haven't done yet, and am far too tired to do any of it, because of all the friends I have been busy seeing.

I think I'll take this week a day at a time, and then use next weekend for SLEEPING.

Today I saw my bro, his wife and their delightful daughter.

I would like to take a moment to say how much I love the many members of my family. I have about a million lovely nephews and nieces, close to the same number of brothers and sisters, and a few slightly less conventional connections, just to keep it interesting. And I love them.


Also, we passed a few different kids from school today, and it made me realise that I no longer dread seeing a child from work every time I step out of my house.

Makes it much nicer. Thanks, God.
Posted by Elly at 22:41 No comments:

In the former, the half term chunks are separated by 'half term holidays', which makes sense, as it is a holiday halfway through the term. In the latter, however, we find ourselves tripping over the term 'half term', as technically it is an end of term. But to celebrate an end of term only seven weeks after it began, and with only a meagre week's holiday feels a bit anticlimactic. I therefore repeatedly heard myself referring to it as 'half term', and then cringed a little bit inside, because I knew that technically it is not called that...

Thing is, the kids call it that. Every teacher I know calls it that. Only the school calendar disagrees.

Whatever it's called, I welcome it with open arms, open heart and an open bottle of wine. Hurray!
Posted by Elly at 21:16 No comments:

The Magic of Almonds

This is partly because there was an element of not-quite-right in all of my lessons today. I either didn't communicate as effectively as I'd have liked, or the kids weren't stimulated in the way I'd imagined, or some other slightly dissatisfying occurrence.

Then we had band, and played boring pieces of music, and I didn't even play them well. This made me miss Wind Orchestra (Notts) and the fact I used to be quite good at the flute.

Then I got home, feeling grumpy and dissatisfied.

Then I realised I might be hungry, and I get really short-tempered when I'm hungry. So I put Jeff Buckley on, very loudly, made a cup of tea and ate the only snack-y thing I have in my cupboards at the moment, which happen to be a bag of almonds. Half a bag later, I am feeling much more rational and far less angry with the world.

Also, it's half term next week, and I am SO ready for it, despite it sort of feeling like we've only just started at school after the summer.

Plus, I am planning on visiting Tesco late this evening. I find supermarkets much more enticing when it's dark outside. (also, I nearly have no milk and would like some for my breakfast in the morning. I'm not just going because they're enticing places to go to. They're not that enticing...)

I think I'll have another cup of tea.
Posted by Elly at 17:29 No comments:

The Echo of Possibility

It just so happens that:

Methinks there may be some possibility of these two people becoming my friends.

I really really hope so.

I don't know how old either of them are (I have a feeling I am the eldest), or what their general situation in life is, but I am excited about the possibility of having some local-ish friends, who seem to be coming from a similar point as the one I am coming from.


Also, I dyed my hair on Friday. It is now the colour of 'spiced chocolate', apparently. I respected the development time to the max, in fact to the point of not leaving it in quite as long as the box suggested, and the result is that it is darker, but not oppressively so. And it is all one colour again. Hurray!

Before: (a dodgy dirty accidental sort-of-blonde) 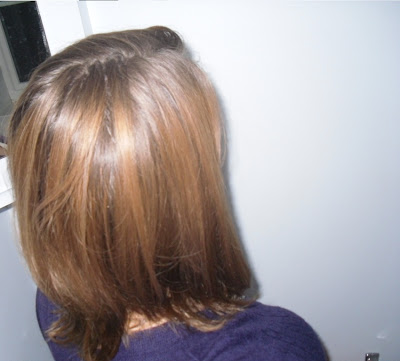 After: an all-one-colour warmer brown (ok, it looks a bit more different in reality) 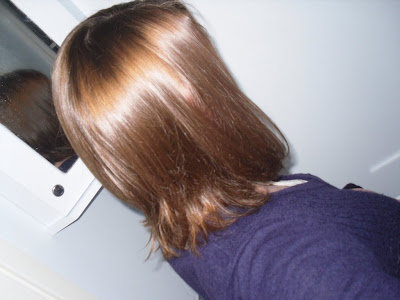 A new brand of reality trash.

It made me cry.

Every now and then, the feeling of irrepressible restlessness niggles away at my insides.

It makes me want to do reckless things and stops me caring about their consequences.

So far, its manifestations are still benign. So far, I have painted my nails Ivy Green, cut my own hair and bought clothes I can't afford.

I took off the nail varnish before work today, only cut my fringe and didn't actually spend a massive amount.

The sensible person in me is, at the moment, still winning. The Dangerous Reckless is there bubbling up from the inside.

1. I like that I had my hair cut short(-ish), but occasionally wish I had the sort of long luscious L'Oréal locks that would make me look glamorous no matter what I'm wearing.

2. I don't mind saving a bit of money, but occasionally wish I could buy lots of lovely clothes that I don't need, but would really like.

3. I like that I can get away with wearing short(-ish) skirts, but occasionally wish I had the svelte Keira Knightley type figure that can pull off the Art Nouveau 20s style, and everything else besides.

4. I like that I can play the piano a bit, but occasionally wish I was really really good at it.

5. I'm glad that I'm happy in my own company, but occasionally wish I had some friends a bit more nearby. I miss going to the pub.
Posted by Elly at 19:18 No comments:

The cold has conquered.

It's official. I hate having a cold.

It's the worst kind of ill. It makes me deaf, it steals my voice, it makes my head hurt and my arms ache, it turns my nose into a shredded warpath of tissue-mauled puffiness and worst of all, it sounds pathetic.

"I have a cold" is usually greeted with some form of "yes, it's going round" or "oh, you have it too, do you?", which is basically a sugar-coated way of saying "get over it, you moaner".


Also, I learnt the word 'presenteeism' today. It's the opposite of 'absenteeism', and apparently is responsible for a large proportion of non-productivity in the workplace. Apparently more people should take time off and get better, because we are costing our work by being inefficient when we're in when we're ill.

Meanwhile, back in the Real World however...
Posted by Elly at 22:06 No comments:

So, we've only had 3 days of October, and already it feels like it's been October for a million years. The reasons for this are as follows:

I have a cold.

It has been raining a lot.

I have a million tonnes of work to get through.

It is mostly dark and a bit dismal.


Tonight I might make soup for tea. Partly because it would mostly consist of potato, carrot and parsnip, which are rather October-y vegetables, and partly because it will feel like I am cramming as many vitamins in my system as possible, without overdosing on vitamin supplements.

On a lighter note, I am rediscovering Alessi's Ark, which still makes me think of Bjork.


I wonder if I can have another lemsip yet...